Originally Published by Our Auckland

Eden Park – New Zealand’s national stadium – is switching from using treated drinking water to bore water to irrigate their turf, thanks to a new custom-made water treatment plant and reinstated bore provided by Watercare, with projected water savings of 16 million litres of water per year.

The bore was installed more than 20 years ago but has been out of service since 2008 because sandy sediment and minerals were causing major concrete stains and clogging irrigators. But from Friday 16 April, the 25-metre-deep bore will pump out up to 163,000 litres per day to water the turf.

The water saved equates to the annual water use of 87 households.

The bore revitalisation project began in May last year when water restrictions were introduced to combat Auckland’s severe drought. The turf is sown with temperate rye grass, which requires daily irrigation in summer to keep it in prime condition. Eden Park got in touch with Watercare to see if the company could help.

Watercare operations improvement manager Anin Nama says the first step was carrying out water quality tests: “Watercare spends hundreds of millions of dollars a year on new infrastructure and while most of the time we build largescale projects, we can also design small boutique-sized treatment plants, such as the one for Eden Park.

“Once we’d done some water quality testing to ascertain the exact mineral make-up and degree of sedimentation in the groundwater, we could design the mini treatment plant itself.” 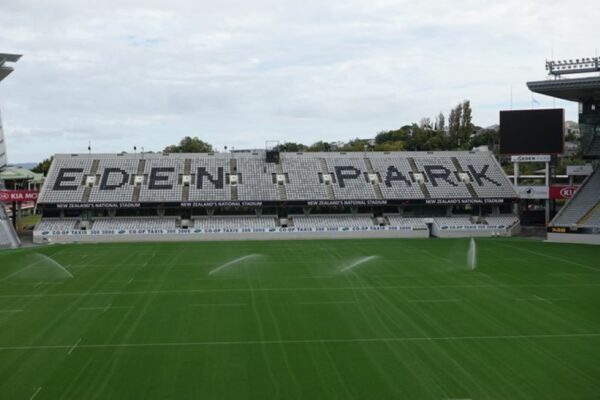 The bore sits unobtrusively alongside a wall next to the No 1 Field. A new mechanical filter removes large sand particles before the water is piped underground to the water treatment plant, which sits 50 metres away directly below the main concourse.

The mini-plant consists of three tanks that remove any further small particles. Chlorine is added to remove manganese and iron. At this stage, the water is clear and has been treated to a high standard but is non-potable. It travels another 15 metres to six 30,000 litre holding tanks. A booster pump sends it to 300 sprinklers dotted around playing and practice fields as required.

The irrigation system is computer-controlled but it takes the skill and experience of Turf Manager Blair Christiansen and his team of six ground staff to decide how much and where the water will go. What appears as a massive green lawn is in fact a patchwork of grass requiring complex management. Different parts of the field have their own microclimate, and the shade footprint from the stadium’s roof alters as seasons progress.

“Having the ability to draw water throughout the year from our own bore provides an assurance of quality for years to come when one of our greatest resources is at risk,” says Eden Park Turf Manger, Blair Christiansen.

“Eden Park could only achieve this thanks to Watercare’s expert knowledge and generosity to bring this initiative to life.”

As thanks for installing the plant, Eden Park is promoting Watercare’s proactive water-saving messaging around the stadium as part of an integrated partnership.

“Eden Park is thrilled to be working with Watercare to develop sustainable initiatives to support the community and futureproof our ability to host domestic and international content for the city. This is one of several sustainable initiatives in place at the park which showcases our commitment to reducing the impact of our events on the environment, while aligning with a number of the United Nations’ Sustainable Development Goals,” says Eden Park Chief Executive Officer Nick Sautner.

Auckland is still experiencing the effects of the drought, with dam levels currently close to 50 per cent, compared to the usual normal levels of 76.9 per cent at this time of year. Aucklanders have saved close to 15 billion litres of water since restrictions began almost a year and at the same time Watercare is bringing new water sources online.

Watercare is looking to extend the bore water irrigation project and likely candidates include Lloyd Elsmore Park in Pakuranga – one of the largest sports parks in Auckland. Bores tend to be found in volcanic areas such as Maungakiekie where underground aquifers naturally occur.